A downloadable game for Windows

You are a painter whose colors are playful and ran away ! You must get them back to do your job. Fortunately, you also have a good endurance, so you can run after them to catch them all and give them to your paint rollers.

Space to change side.

We don't own the music, sound effects and fonts.

I collected 108 colors at my best. I was surprised by the bushes, they made me die a lot.

I think that the beginning of the game is far more difficult that the second part. In the first part, we have a lot of boxes to dodge, and the bushes increases the difficulty (it's a very good idea to see what's in the bushes only if we are in there, like in LOL, but with the speed, I never had the time to clearly see what's in there ahah). In the second part it's faster, but the patterns are very repetitive and not so hard to take. Moreover the bushes are more rare.

The graphics are simple but it's very good for a game jam. And I have to say that it reinforces the idea of the game. It's hand made, it's a paint game after all ahah. I have to admit that I was surprised by the aspect of the painter (the mustache make me think of Mario).

I liked the music (until I died 6 times ahah), but I don't really understand why you choose it. The music is very peaceful, as the player should be when playing your game but it makes a strong contrast with the high speed of the game. Maybe you wanted that ?

The game lacks a bit of animation to make it more alive, but for the time you had it is well polished, we can play it without problems and that's already great ;). 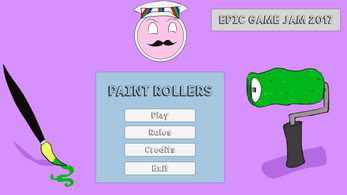 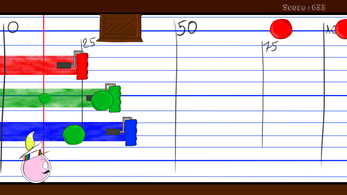 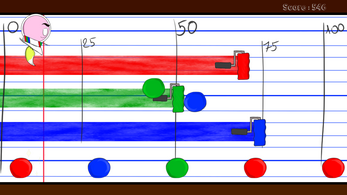 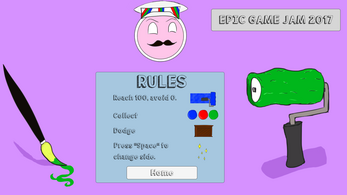